After a long night of not-really sleeping, we awoke to disaster. It seems there was a rat in the hut that was rather bold. Lots of our food had been nibbled on, and some of it had disappeared entirely, and all right by our feet as we slept. Ironically, the food we used to patch up walls from the wind (we were that desperate) survived entirely. Fortunately all we had to do was one day’s hike with the food that survived and we would be at our next resupply, Sani Top. After a small breakfast, we headed out on our mission to Thabana Ntlenyana.

The wind had calmed slightly during the night, but could still easily be described as gale force. And it increased in intensity as we neared the top. That day I got the slightest of frostbite on my longest finger, mostly due to the wind chill I am sure. The top of Ntlenyana is bland, it is more of a high point than a hill really. But the views were good, albeit briefly seen. We made our way quickly down the valley to where we could layer down drastically, to our relief. One short climb later we were within sight of the church on the Sani road, to which we aimed.

Some may consider this a cheat, but we planned from the start that we would walk to the church and try to catch a lift into Sani, about 6km. We saw thumbing a ride as part of the adventure. But after arriving at the road at 13:00 and waiting for 30 minutes without seeing a car drive past, the church leader Immanuel came out to offer us accommodation. I was introduced to his family while Josh dozed outside. after politely declining, at 13:45 we decided to start walking along the road, in case nobody was able to give us a lift. It was a Tuesday after all and there were less tourists doing the route.  After about 10 minutes of walking and praying, a Landy arrived behind us, and we threw out our thumbs. The chirpy private tour guide commanded us to jump in , and we spent the journey talking about the area and our hike with him and his tourist group.  Thank you.  Josh and I marveled at what it was like to sit on something soft for the first time in 9 days.

On arrival, we headed straight for the pub, ordered two burgers and Maluti beers, and the combination went down quicker than a ropeless anchor. After making sure we were satisfied, and slightly inebriated, informed the staff that we had a booking for the night at the backpackers, and they handed over our third and last resupply parcel. Unfortunately our parcel contained a milk container which had burst and so that night, if we weren’t showering (40 mins) or eating at the pub (another beer and burger, please), we were cleaning our food stuffs from off milk. We also made jelly using the outside as a fridge. Delicious with condensed milk.

The staff at Sani Lodge and pub are amazing.  I would like to just take the time to thank them, for incredible service and advice.  Right down to finding weather maps for the remainder of our trip.  Oh and did I mention the food?  That night we slept on a mattress with heavy blankets. Bliss. 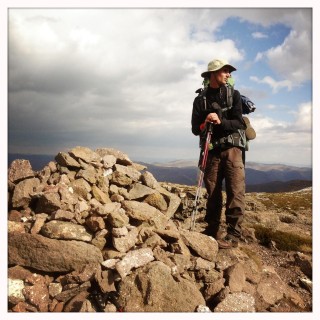